Bathukamma – a festival of flowers

The culture of Telengana can be seen clearly in this festival.In this festival the flowers are arranged in a stack manner which are very rare and unique seasonal flowers.These flowers which are rich in medicinal value are arranged in the form of layers like a clay pot.The word Bathukamma itself says that it means the mother goddess to come alive and in this festival goddess Maha gouri who is a life giver is worshiped in the form of Bathukamma.Women wear traditional dress on this special occasion,mostly women like to wear saree and few teenage girls wear half sarees with the matching jewelry and accessories.It intensifies the importance of womanhood. 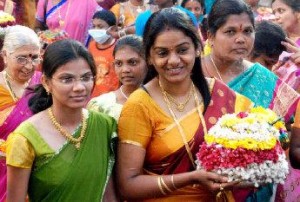 Traditional sarees and half sarees on this special occasion

This is the second largest festival after Vijaya Dashami in the Telangana region.Goddess Gauri who give life giver is worshiped in the form of Bathukamma.In that festival women try to seek blessings of goddess gauri to give them prosperity and do good for their family for the whole year.Very bright and colorful flowers are arranged step by step in the form of a cone and at the top of it turmeric are placed which signify both life and eternity in their colors.The goddess is created every year and is worshiped for the whole 9 days completely with divine and pure heart, later on the tenth day the goddess is immersed duly in local water bodies.This is the largest festival in Telangana and was started long ago about centuries back and is still celebrated as grand cultural event in this region with great enjoyment. 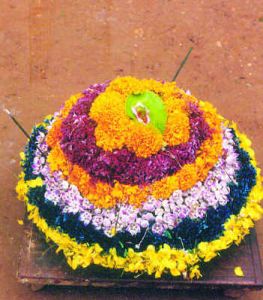 This festival involves mainly flowers the goddess Gauri devi is arranged in as a beautiful flower stack in seven different layers as a conical mound.As the flowers arrangement resembles goddess they are generally unique and having medicinal value.Men from the houses go around and search for the flowers like Gunuka, Tangedi, Lotus, Alli, Katla, Teku flowers and gather them which bloom during this festive season in most vibrant colors in the uncultivated and barren lands of the Telangana region.By using these gathered flowers women prepare their goddess Bathukamma by using a wooden plank or wide plate and arrange these flowers which are fragrant in the form of layers.After the plank is taken the flowers are taken and they also use pumpkin to decorate the flower top and also keep tumeric on the top of this flower mound.

After the completion of 9 days on the tenth day the visarjanam or immersion of Bathukamma is done in the nearest water bodies.This festival is celebrated with complete devotion and interest throughout the Telangana region.The Women of Telangana region participate in this festival with most enthusiasm and great fervour by dressing up in the complete traditional dresses like wearing traditional silk sarees and wearing matching jewellery for it, whereas the young girls wear langa voni or half saree with complete accessories.The women of Telangana gather in large numbers and place Bathukamma in the middle and dance around them by singing songs related that are of stirring Bathukamma folk songs.Along with the songs women move round the bathukamma by clapping their hands which give a wonderful look for the festival.

Bathukamma festival which is also known as Bodemma looks amazing when the lakes are filled with flowers.On this day, Maleeda is made which is offered to the god as a prasadam made of jaggery and at the end of the day,it is distributed to the people.The festival ground is filled with women as male companions aren’t allowed here and young girls participate in large numbers.

There are many myths regarding this festival.One of the myths  according to legends is that Bathukamma or Parvati is a lover of flowers.Flowers are arranged om a square wooden plank with that size of frames forming on top of it which resembles the shape of a temple known as Gopura.On the top of the flowers,a lump of turmeric is kept and this little floral mountain is worshipped as Goddess Bathukamma.

Sweets – Yummy treats for You!!