Shimla,located  on the lofty ranges of the Himalayas with about 7,500 ft above the sea level,is one of the most popular tourist destination throughout the world.It is a place free of commercialization and globalization and is famous for its lifestyle,arts,crafts,food,fairs,dance and music. Shimla is quite different from other states with its own charm and portrays a harmony between traditional values and modern thoughts.

Shimla is considered as one of the best tourist and holiday spot in India.In the year of 1864,it was declared as the Summer Capital of India during the reign of British and after the independence,it became the capital of Punjab.Now,it is a proud capital of Himachal Pradesh.

Pic showing the history of Shimla

The history of Shimla begun with the discovery of British with a little village in 1819 and was made as the Summer Capital of India.Shimla was truly earned by the government of India at the time of Lord William Bentinck.After the Gurkha war,British soldiers founded a dense forest near Golden Shyamala temple and gave the name as Shimla after the name of the goddess.Also,many fine fabrics,French sauces,English sweets and fine horses were available in Shimla making it popular.

In 1819,Lt.Ross,the Assistant Political Agent of hill states set up the first residence of British here and his successor built the first concrete house in 1822.In the mid 18th century,the Hindustan Tibet road was constructed from Kalka to Shimla.Shimla was connected by the railways in 1903.It eventually became the capital of Himachal Pradesh,after the independence,in 1966.

Shimla’s geographical location is dependent on its pleasant climatic conditions that suits a perfect vacation.It has an altitude of 2,100 meters above sea level,lying between 31.060 North to 77.130 East.The altitude is having a vegetation of pine trees.The city is spread over an area of 25 square kilometers with a look of majestic hill station.The Himalayas fall to the north east of Shimla. Shimla consists of sub-tropical forests,maize fields,cedar  and orchards. 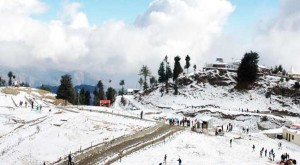 The view of climate in Shimla

Shimla’s climatic conditions are pleasant in any season favoring the tourists’ visit.It may have sudden changes due to the high altitude and may result in sudden drop and rise in temperature.Summers are warm  with packed tourists and the temperature never goes beyond 270 Celsius.Even though there are occasional rainfalls,they are just bearable.Monsoons last from July to September that may be not suitable to visit as they are pretty heavy.Landslides are too frequent  with a range of 150 -250 Celsius.Winters last from November to February with cold and chilly winds from the Himalayas.The temperature may drop down to zero levels.Snowfall is the main attraction in this season.Even though transport and residence is a slight problem,people love to visit Shimla in this season.

Tourism a major economy of Shimla

Most of the city’s economy is driven from the tourism.Shimla is a famous healthcare centre having one medical college and four major hospitals named as the Indira Gandhi Hospital, Deen Dayal Upadhyay Hospital,Kamla Nehru Hospital and Indus Hospital.Hotels in the city are one of the major sources of income.Shimla is one of the lead cities in India for having large number of hotels.Shimla is also famous for its quality of education and for the leading schools it is having.The higher education institutes are also present in Shimla namely Himachal Pradesh University and Indian Institute of Advance Studies.People from different parts of the country prefer to study in Shimla because of its climatic conditions and hill station status.These has been adding to the economy of the district as well as the state.At present, government is trying to promote technology and IT sector in Shimla for its growth and promotion. 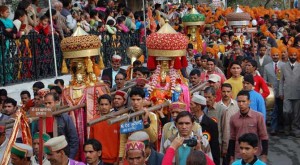 People of Shimla are informally called as Shimlaites.A variety of festivals are celebrated in Shimla.During the peak tourist season, Shimla summer festival is celebrated and it lasts for 3 to 4 days.The highlights of this festival include events performed by popular singers from all over the country.Shimla has many places to visit and the local hangouts are the Mall, the Ridge that are in the heart of the city.Some of the oldest and famous buildings are the Indian Institute of Advanced Study and Wildflower Hall which is now a luxury hotel.The State Museum is one of the oldest Museums in India and it holds a huge collection of paintings, jewelry and textiles of that region.Naldehra nine-hole golf court is one of the oldest of its kind in India that is located farther out from the city.Kufri is a ski resort and is one of the best tourist attractions of Shimla located 19 kilometers away from the main city.Lakkar Bazaar in Shimla is famous for its hand crafts and wood items.Shimla has a natural ice skating rink and state and national level competitions are more often held at this venue.Shimla Ice Skating Club manages many events every year in the month of January.Due to the Global warming and increasing population in and around Shimla, the amount of ice has been decreasing in the past few years.

Shimla has many temples and is frequently visited by many devotes from nearby towns and cities.Jakhoo temple, one of the famous Hanuman temple is located at the highest point in Shimla.Kali Bari temple of goddess Kali is situated near the Mall.Another Hanuman temple, Sankat Mochan is famous for the numerous monkeys located on the Shimla-Kalka road about 10 kilometers away from the city.We can also find other places of worship like Gurudwara near the bus edge and a famous Church on the Ridge.We can find excellent stone works and architecture on the walls of temples in Shimla.The sculptors that are carved on the temple walls show the art of Shimla. 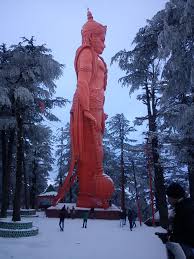 Jakko temple in Shimla located at the highest point