As we all know that India is a land of festivals and celebrations.Dussehra is one of the most celebrated festival in all the parts of the country.It is a annual festival and is celebrated for seven consecutive days.There are two important stories behind the celebration of dussehra in India.One story related to Lord Ram and the other relates to goddess Durga.The main reason for the celebration of this festival is due to victory of good against evil.Many of the festivals in India are related to the epics like Ramayana and Mahabharata and Dussehra is one among them. 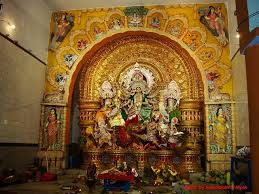 According to north India, history of dussehra began when Lord Rama declared war on Ravana, who took away Rama’s wife Sita.Lord Rama took blessings from goddess Durga and he succeeded in the war that took place between Lord Ram and Ravana.This war lasted for ten days.Thus people started celebrating dussehra to seek blessings from the goddess of power and courage.

Coming to south India, the history behind the celebration of dussehra festival as follows.When Mahishasura was undefeatable even by Lord Brahma ( the creator ), Lord Vishnu ( the protector ) and Lord Shiva ( the destroyer ).At that time goddess Durga was powered to destroy the demon Mahishasura.This victory against the demon is celebrated as Vijayadashami or Dussehra.During Vijayadashami for nine nights people worship goddess Durga.Generally this festival falls in the month of September or October.

On the first day of navaratri, many of the northern states like Himachal Pradesh, Kashmir, Uttar Pradesh, Uttarakhand and west Bihar have a tradition to plant barley seeds in earthen pots.On the ninth day i.e., Dussehra the sprouts are kept in men’s cap or ears.They believe that it is a symbol of luck.In some parts of Maharashtra during the ten days of this festival, many plays and dramas based on Ramayana are performed.While in the evenings,there are outdoor plays and large parades with sculptures of Ravana, Kumbhakarna and Meghanad.These sculptures are burnt in the open place.Generally dussehra starts with the end of hot summer.At this time it is believed to spread infections.To avoid those infections they burn these large sculptures which are made out of phosphorous in air.By doing so it certainly purifies the atmosphere.Where as in temples they perform chandi homa with same cause. 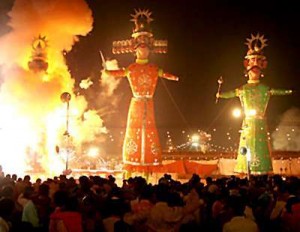 Vijayadashami is celebrated in south India in various ways.Most of the south Indians believe that it is a best day to start anything to achieve in life.This festival is celebrated as Golu in Andhra Pradesh, Karnataka, Tami Nadu,Kerala from navarathri onwards.The exhibition of toys in various places undertake various names.It is known as “Bombe habba” in Karnataka, “Bommala Koluvu” in Andhra Pradesh,”Bomma Gollu”in Kerala and Golu or Kolu in Tamil Nadu.As the goddess Durga needed lots of power at the time of assassination of Mahisahasura.Many of the gods and goddesses transferred their power to her and they all stood still as statues.So to respect their sacrifice, people prepare small statues in the shape of gods and goddesses.People think that it is a favorable day for starting their child’s formal education.Also people keep their books, tools, materials for puja and take back those things on the ninth day of navaratri.

According to Telugu people, Vijayadashami is a auspicious day for starting a new business, education, selling or buying of things.In the city of Hyderabad, Durga Puja is being celebrated for more than 60 years till now.During navaratri goddess Durga is decorated in different avatars like Bala Tripura Sundari, Mahishasura Mardhini, Annapoorna, Kali, Raja Rajeswari, Kanaka Durga, Lakshmi, Saraswati and Gayatri Devi.In Andhra especially the festival is celebrated grandly in Vijayawada.Every year it is celebrated grandly in this place. are celebrated every year with great pomp & show and tens of thousands of people visit this temple during the navaratri’s.

In karnataka people celebrate ayudha puja on the ninth day of navaratri.They celebrate it by worshiping the commonly used tools like pens, books, kitchen tools, vehicle tools and many more.They believe whatever may be the work that is started on this day will lead to success with the help of goddess Durga blessings.

In Kerala the last three days of navaratri is celebrated as Saraswati puja.People of Kerala keep their books for puja on the first day of navaratri and take them back on third day i.e., Vijayadashami.Ayudha puja is also conducted during this period.

In Tamil Nadu they celebrate the worship of goddess Lakshmi, Saraswati and Shakti.People fast on all 9 days of navaratri and tie a holy thread on fist.People of Tamil Nadu dress up in various avatar’s of goddess and collect money.All the money that is collected is offered to temple on the ninth day of navaratri. 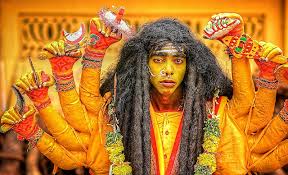 In Maharashtra, the festival is celebrated on the tenth day in the month of Ashwin.On the first day people visit each other and exchange sweets.On this occasion people worship Apta tree and decorate their home or work place using those leaves.They believe it brings them luck.They also start new things on this occasion believing it brings success and will have blessings of goddess Durga.

In Bengal, Orissa and Assam, Dussehra is celebrated in the form of Durga Puja.It is celebrated for five days in Bengal, whereas in Orrisa and Assam it is celebrated for four days.As a part of their celebration on the fifth day, they place a statue of goddess Durga and is beautifully established in the form of Pandals.They perform Durga puja on sashti, sapthami, ashtami, navami followed by a great puja on tenth day.Women take sindhoor on their foreheads each other.In this way they play sindhoor holi against each other. 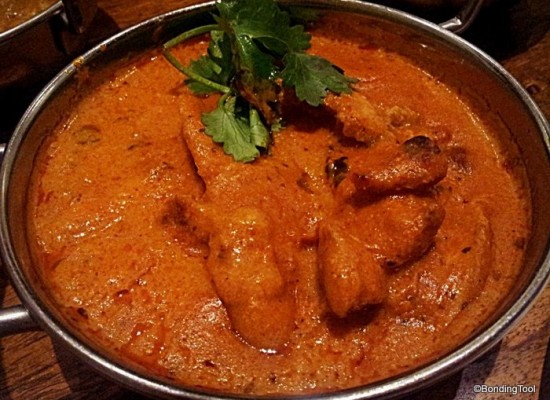