The India of today has had its first human settlement roughly around 7500BC by an ancient submerged river settlement in the Gulf of Cambay. It is believed that Homo heidelbergensis were the first to arrive in India touting crude stone tools. Around 70,000 years ago, modern humans migrated east, out competing the natives and were responsible for the disappearance of the so called hobbits.

Asko Parpola, Finnish Indologist and Sindhologist proposed a theory of the first Indo-European speaking invaders called ‘Dasas’ being the first to arrive in the subcontinent. They were succeeded by the Indo-Aryans, the Rigvedic Aryans. The study of the Indo-Aryan migration was studied by Max Muller in the mid 19th century. The advent of the Dravidians is dated much before the Aryans, who were supplanted later. The earliest settlers of the North-east were the Austro-Asiatic followed by the Tibeto-Burmese and then by the Aryans. The entry of Islam is marked by the Arab traders as early as 7th century AD to coastal Malabar, then to coastal Gujarat in 11AD and to North India in 12AD with Turkish invasions. The amalgamation of many such entries into the nation laid foundation for the pillars of the “Indian Cultural Diversity”.

For any other country in the world, diversity might be an inconsequential phenomenon laid backstage. But, in India with a population of over 1.21 billion people, more than 2000 ethnic groups, 1,635 languages, over 6000 dialects, 6 main religions and scores of other faiths, diversity in India is a gargantuan expression. 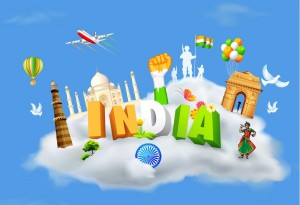 The beauty of this country lies in the assimilation of various cultures, tradition and people, emerging out as a beautiful dawn spreading its rays to the rest of the world. The sublime charm of India lies in the fact that there is no centralization of cultures in a place but a complete dispersion throughout the country. The ringing of temple bells, prayers at the mosque, carols sung in the church, meditation in the Buddhist shrines, jap in the Gurudwaras, invocations at the Jewish and Parsi temples, the Zoroastrian fire temples, there is a magical binding in the air breathing out fumes of national integration unparalleled to any other nation in the world. 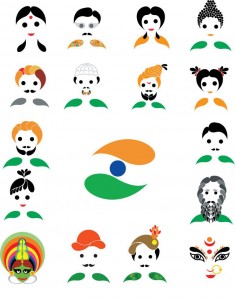 Being a multi-religious society festivals are celebrated with great pomp and welled up enthusiasm across the country. Hinduism being the dominant religion of the subcontinent intertwines many traditions and celebrates many festivals like Navrathri, Diwali, Sivarathri, Ganesh Chaturthi, Holi and many more. Muslims fast during the month of Ramzan and celebrate Bakrid, Milad-un-Nabi, Waqf al Arafa and Hijra. Buddhists observe Buddha Purnima whereas Sikh festivals include Baisakhi and Gurunanak Jayanthi. Adding colours to all these festivals is the Dree, a tribal festival celebrated in the North-east. Some festivals are celebrated by many communities with matched up excitement and fervor. The whole country adorns beautiful attire, with an assortment of festive cuisine, larger than life idols, clothing, rituals, and harboring harmony fulfilling the connotation of universal brotherhood. 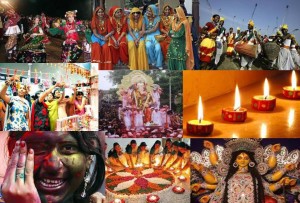 Indian weddings are known all over the world for their opulence, colors, exquisite dressing, lavish decorations, enthralling music, dances, potpourri of dishes, vedic mantras and chanting exclusive to each religion. Marriages are preceded by Sangeet, Mehendi and many other fun filled activities bringing families together and sustaining bonds from ages. The emphasis is laid of the union of two families and the married couple. Many wedding customs are common to many religions. Kanyadan, vows around the fire are a forte in Indian weddings. The bonding of two souls is a tranquil treat to the eyes gathered. The Indian wedding system is being hailed all over for its assertion of family values.

Greetings are an inevitable part of Indian culture. Be it Namaste, vanakkam, assalmu alaikum, sat sri akal or swagatam, reverence to the elders and mutual respect to peers is the main criteria of such salutations. “Godliness in me bows to Godliness in you” is the substance of Namaste and assalamu alaikum refers to “Peace be upon you”. Every greeting is to convey a wholehearted obeisance and a hope for each other’s prosperity.

The cuisine of India is unique to every state and region. It is heavily influenced by religious, cultural and traditional choices. It deploys a wide range of food preparation styles and techniques, culinary, spices, herbs, vegetables and fruits, each of them exclusive to a place. Every place in India is famous for their variety of dishes. Foreign invasions, trade relations have brought new foods later integrated into the local cuisine. Turmeric is a main ingredient of Indian food to which even the western world has found taste. Hyderabadi biryani, Gujarati dhokla, Poha of MP, UP’s gajar ka halwa, Sarson da saag of Punjab, Rajastani kachori and many more, sets the tongue buds dancing to their taste. Harold Mc Gee, author of On Food & Cooking states Indian food carries the taste of strangeness and confusion and wonder. 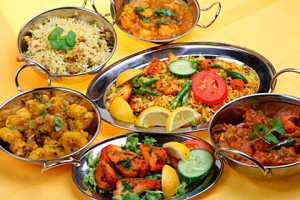 Clothing in India depends on the climate, topography, traditions and ethnicity. Kancheepuram pattu saris, ghagras of the north, mehelka sador of Assam, chudidaar, salwar kameez, women’s clothing comes in a wide range of hues and colours like the rainbow. Dhoti, pancha-lungi, sherwani, dastaar, peta form the men’s wardrobe. India is a home to many weavers with varying fabric arts like zardosi, chikan work, kashmiri work, phulkari, kasuti and kantha embroidery. They depend on the fabric texture, design and workmanship in expressing the art with thread. Festive seasons have people decked up in rich fabrics depicting social status. India’s clothing history goes back to the Indus civilization where cotton was spun, woven and dyed. Ancient Greek historians Herodotus and Arrian speak volumes of Indian clothing methods with opulent beads and dyes. 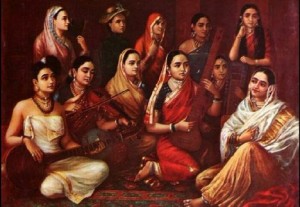 India has had a long romance with the art of dance and music. Natyasastra (the science of dance) and Abhinaya darpana (mirror of gesture) are the surviving Sanskrit documents of the art of dance. Indian classical dance includes eight forms; Bharatanatyam of Tamil Nadu, Kuchipudi of AP, Kathak of UP, Katakali and Mohiniattam of Kerala, Yakshagana of Karnataka, Manipuri of Manipur, Odissi of Orissa and Sattriya of Assam. India is a home to a spectrum of folk dance forms like Bhangra of Punjab, Bihu of Assam, Kolattam of AP, Lavani of Maharashtra, Chhau of Jharkand, the list being a long drawn one. Dance is a way of expression. Mythological tales are mostly depicted in dances. But in this emerging world, Indian dance has also undergone many changes and are standing for social issues too. India’s tryst with music has a history spanning millennia and is grouped into Indian classical music, folk music and pop. Carnatic and Hindustani music are the classical forms, the later once being a subset of the former. They are traced back to 15th-16th centuries AD. Such diversifications in art forms are unprecedented in the entire globe. 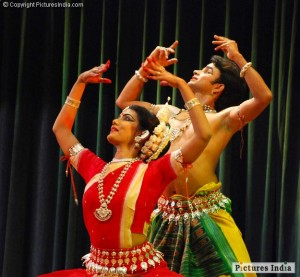 Indian art forms have gained popularity over years and many foreigners have shown keen interest in perfecting the art. Out of reverence to the art, they have opened schools in many places of the world. Drama and theatre also find a decorous place with Kalidasa’s famous plays of Shakuntala, Meghadoota and later Bhasa. Oldest, yet surviving theatre traditions of the world is the 2000 years old Kutiyattam in Kerala. Indian culture is an exhaustive list of varying streams, streamlined with changing times evolving every time with a new look yet maintaining the vintage of the past.

India is a land of veritable treasures in the realms of art of painting and astounding architecture. India surpasses others in transmitting spiritual contents into expressions through colours, personifying high ideals and common beliefs of people. The cave paintings from the Ajanta, Ellora, Sittanavasi, Bagh and temple paintings conduces to fulfill the ultimate aim of life, moksha from the cycle of rebirth and death. Sculptures come down from the Indus civilizations which are made of bronze, stone and other pottery figurines. There is a Greco-Roman, Greco-Buddhist influence on sculptural forms. Many Hindu temples indicate strong architectural base encompassing multitude of expressions over time. Indian architecture has influenced eastern and south eastern Asia due to the spread of Buddhism. There is a difference of temple architecture in north and south India with the latter ones spread over large areas and representing the Dravidian format, while the former has a stamp of Aryan architecture. Thus it can be said that Indian tectonics has a profound presence in the world. 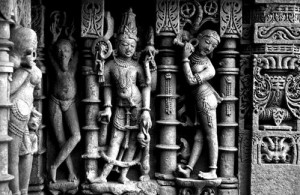 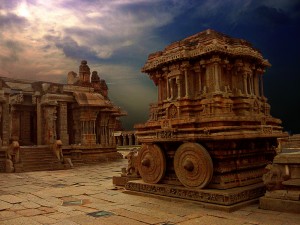 Kalaripayattu from Kerala is one of the best known forms of martial arts. Paiki akhada, mushti yuddha are among the other forms. The medicine of Ayurveda has paved its way gaining admiration from all over the world. Panchakarma, a subsidiary of Ayurveda is a holistic approach which has spread its reach far and wide. Indian mythologies Ramayana and Mahabharata are the centre lore of Indian civilization changes. 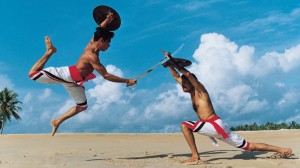 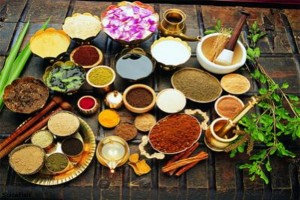 Such a multifarious civilization is a paragon to the world which blends itself with every culture forming a beautiful and closely woven web transcending religious boundaries. The bounty of Indian culture is incalculable. It a complex society, but one which has a tolerance towards others way of life which makes it stand apart. The cultural diaspora of Indian culture is a cool breeze bringing fragrance to lives. Indian culture is a bag of surprises surmounting the anticipations of a new cultural onlooker and never ceases to surprise the world.