“You take on your house name?! Whoa, that’s totally cool.” I get that from many people all the time when they ask me about my funny sounding surname. It is bound to sound funny because it is not just a simple name of a person but the name of the hereditary house (tharavadu) of that specific individual. In other words, every person will have a house name and all the people belonging to that particular house/family will take on the same name. This practice is followed by the Nairs mainly along with some of the other non-brahmin castes. Now you must be wondering who Nairs are.

They are the ones who come second in the caste hierarchy of Kerala after the Namboothiris. The Namboothiris are the Brahmins and they comprise the whole section of priests. They are the most respected in the society and the Nairs follow them in the status list. While the Namboothiris are the priests, the Nairs comprises of the ministers of the state, the state cavalry, the state administration and such. They are just below the royal family in ranking; they were the Kshatriyas. 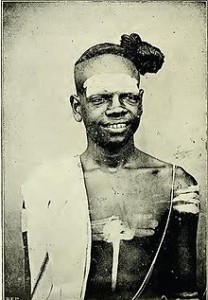 A Namboothiri, notice the sacred thread and the tuft of hair to the front

The Nairs have always followed the matrilineal system as I mentioned earlier. Unlike the Northern parts of India, patriarchy was never followed. The decision making power fell on the female head of the tharavadu  along with the senior most male head called the Karnavar. It should be noted that the powers of the female head was mainly in the inner domains of the house. Even though the power is enjoyed jointly by the female and male head, their seniority decides who has the final say in the matter. 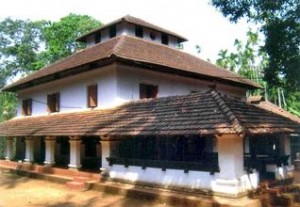 Also, the property and the name is passed on to the daughter and not the son. The new born takes on the family name of its mother. As a result of that, daughters are more vied in this society! This system is known as ‘marumakkathayam’. It was practiced widely in the olden days while many of the Nair families of today have turned to the patriarchal system where the surname is that of the child’s father.

The most interesting fact that we can find about this community’s culture is that of marriage. The present society which tries to hush up everything related to sex and sexual morality should learn a thing or two from them. For example, divorce still carries with itself a stigma whether we accept it or not. But things were not so bad years before. As we technologically advance, we grow more and more narrow minded, going backwards in terms of rationality. Back in those days, the Nair community did not follow the typical form of marriage of the present day.

The women especially had the luxury of having multiple partners and it was considered normal if not preferred while something like that is practically impossible in the so-called modern time! They availed themselves of sexual freedom with no attachment of stigma as opposed to us. Imagine the irony of it.

At an extremely young age, the girls are married to a Brahmin man but they don’t live together and it is called ‘kettu kalyanam’ (mock  marriage) which lasts for 4 days. The girl will have nothing to do with the man unless and until he dies, upon which she observes two weeks of mourning. And once they reach puberty, it is celebrated in an extensive manner with a grand function arranged where the girl is rubbed with oil, decked in gold etc. And finally comes the real marriage where the man and woman in the relationship consummate their marriage and this was called ‘samhandham’. The woman was free to have how many ever sambandhams as she pleases! It is officially carried out with a Namboothiri. He would visit her house at night and take leave in the morning after a bath so as to purify himself (though that doesn’t stop him from having intercourse with her).

The twist to the thing is that the children born out of this relationship will have no connection of any sort with his or her father (Namboothiri) . This was a devious way to ensure that that the property never left their hands. Anyway, this kind of relationship can also be viewed as the policing of open sexual morality. It worked on a totally different level. The Nair woman was free to consent or terminate the relationship at any time just like the man and thus it speaks of mainly one thing – equality in sexual matters.

However, the Namboothiri women were not so lucky. Referred to as ‘Antharjanams’, they mostly died unmarried or widowed. Only the oldest Namboothiri son is allowed to marry a Namboothiri girl while all his younger brothers are supposed to have sambandhams. The Namboothiri girls were usually married off to old, wealthy Nambhooothiris who already might be having other wives. So, once their husbands die (when she is around 18/19), they remain widowed throughout their lives since they are not allowed to remarry unlike the Nair women.  If they did commit infedility or even fantasized mentally, they were put to trial and finally excommunicated. The only famous Antharjanam to have broken this rule and to have slept with more than 65 men is the beautiful Kuriyedathu Thathri.  Boy that was one beautiful, brave lady. 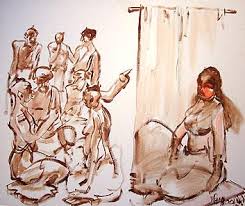 The ongoing trial of Thathri

Apart from her, the other chickens in the coop never saw er, sexual daylight. So,even if the Namboodhiris were above the Nairs in the cast hierarchy, the Nair women sure were better off than their Namboothiri counterparts!

What about their dress?

I am sure most of you have come across plenty of Raja Ravi Verma’s famous oil paintings of saree-clad women in elegant postures. The attire is not exactly draped like a saree but is worn in a specific manner with the hair tied tightly in a bun to the front-side of the head. This style of dressing was mainly observed in the princely state of Travancore. This potrayal of the dressing style is justified by the fact that Ravi Verma was from the same region. In the other areas of Kerala, the saree is draped in another fashion. 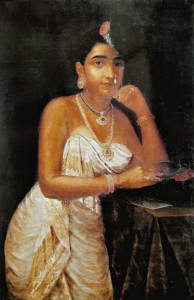 The Travancore style of draping

Originally the men and women wore only a loin cloth around their waists (worn by Thiyyas). There was no thoughts of nudity or shame related to it since the weather of Kerala allowed dressing only in minimal. The top body was covered with only necklaces and other ornaments. Later, it evolved into the waist cloth along with a piece of cloth worn across the bosom loosely. Then again, this was allowed only for the Nair and Namboothiri women (though sometimes the Nair women stayed topless inside their houses). The lower caste women were expected to expose their breasts as a sign of their low status. Finally, this turned into a full fledged revolt and the women of lower castes obtained the rights to cover their top body. 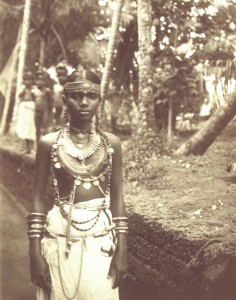 Speaking of food, we should be thanking our mothers to be tolerant enough to put up with our daily fussing over delicious dishes everyday. That was not the case years back! Mind it, no pizzas or shawarmas. The Nairs ate rice gruel all three times of the day. The richer families had tasty items accompanying it though I am sure that those wouldn’t beat our junk.

Last but not the least is the set of superstitious beliefs. Hailing from a Nair family myself, it’s a common thing for me to ask my friends (just for the heck of it) if they have a ‘kari naaku’ which means a tongue with brown spotting since it is believed that the things uttered by those who possess a kari naaku come true! They also have the notion of evil eye which means that if you praise someone too much for whatever quality, they attract the evil eye and the victim will lose that quality eventually.

Of course we can never cover the entire culture and practices of this community in just one article, but I have tried my best to put in the most interesting parts of it!