Spinach is a flowering plant which comes from the family of Amaranthaceace. Mostly found in central and southwest Asia, it’s a plant which can survive throughout the year. The leaves come in various shapes and sizes with leaves of a bigger size found in the base and small leaves found in the higher stems. There are basically three types of spinach which we use. Savoy is a dark green, curly leaf, found in bunches in our local markets. A hybrid variety of savoy is the semi-savoy. The leaves of this variety are curled as well and are grown for both fresh as well as processed industries. Other varieties include the flat and smooth spinach which has broader leaves than savoy. It is grown sold as processed and canned foods, cold soups, baby foods etc.

Spinach finds its origin in Persia and the neighboring counties. In India it was introduced by Arab traders who had travelled here for other spices. The spinach was a popular vegetable among the Arabs and so they introduced them in all the regions they travelled. By the 12th century, this vegetable had reached Spain which then found its way to France and England by the 14th century. The reason why people became so found of this vegetable is that it grew during the time of spring when vegetables were scarce and Lenten dietary was discouraged. Spinach became an important ingredient in the dishes served to the royals and during wars soldiers were given wine and spinach juice when they suffered from hemorrhage.

The fresh green spinach leaves is storehouse of vital minerals and vitamins. Vitamin C which is very essential for proper body functioning is largely found in the leaves that are dark green and vibrant. Vitamin K1 , which is also found in the leaves helps in maintenance of bone health. When we consume spinach, the friendly bacteria found in our intestines convert vitamin K1  present in the leaves to vitamin K2  which then produces osteoclasts which is a non collagen protein found in the bone. These acts like anchors and holds on to the calcium molecules in the bones making it stronger. Sunlight is mainly used by leaves during photosynthesis to form the green material or chlorophyll which is something which we studied in school. However what happens further is that this forms the major portion of the molecules called glycoclycerolipids which are rich in health supportive nutrients. According to certain studies, Spinach like other green vegetables like broccoli and cabbage has anti-cancer qualities. They also help to protect and maintain the digestive track, arrest inflammation and strongly prevent the occurrence of prostate cancer. The spinach leaves also contain an abundant supply of some very unique qualities of anti cancer carotenoids called epoxyxanthophylls. It has very powerful anti-oxidant protective qualities and is highly concentrated in beta carotin, luteinzeaxanthen and flavonoids, the main phytonutrient which helps in promoting health. The spinach therefore undoubtedly tops the list of the most nutrient rich healthiest vegetable in the world and having said that it is therefore important to make this an important part of your diet. According to nutritionist, it will be beneficial if we consume spinach 1-2 times per week. 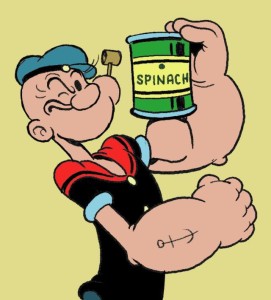 We would all be familiar with the popular cartoon Popeye the sailor man. The story line of the cartoon was very simple where we have a sailor who works in the docks and is mostly mocked and disturbed by a fellow sailor Brutus who is jealous of him and always finds ways to hurt him or degrade him so that olive chooses Brutus over Popeye as he looks more strong and healthy. The plot is set in such a way that Popeye falls in the trap set by Brutus and by the time pope tries to get out, he kidnaps Olive. Popeye tries his best to rescue himself and Olive but when his out of power and becomes sick and weak fighting the traps laid down for him. When no other way seems useful he takes out a can containing fresh spinach leaves and starts munching and eats them whole. Popeye always carries a can with him and its contents are shown as some kind of power boosters.  As the spinach enters his body he is all power up and his energy reaches the highest possible level and now with all the power back again he fights  Brutus and safes his dear ones. The use of spinach in this cartoon made it famous throughout the world such that it became an important ingredient in the kitchen of every household. Children who earlier did not like spinach started eating them thinking they would became as strong as Popeye and fight their enemies.

The reason why the cartoonist used spinach in his cartoon was based on a popular belief in those days that spinach had a high quantity of iron and so the cartoonist wanted to show that iron makes the body strong due to which he used spinach in his cartoon. However later it was found that this notion was a mistake done by German scientist Emil von Wolff who due to some miscalculations gave a value for iron which was ten times more than the original content value. This faulty measurement was finally found out and corrected in 1930. However the bottomline fact that spinach made you stronger was always correct. 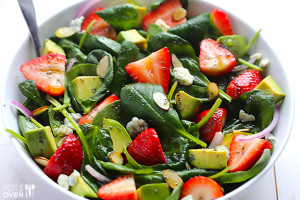 Today we see that the popularity of spinach has grown so much more than it was before and also find so many ways in which spinach is being used both in salads as well as mouth watering dishes.