Have you ever given a thought to one elusive and relatively unimportant question? Don’t you think that Indian sweet dishes differ hugely and vastly from those around the world? While the entire world enjoys cheese cakes and apple tars and chocolate pastries; here at home we enjoy Moti choor ke Laddoos, Sooji ka Halwa, Kheer and Jalebis. I, for one have never seen any foreign sweet dishes similar to what magic our Indian sweets offer. They are crude in shapes and relatively uncreative as compared to their Indian counterparts. We have spiral shaped jalebis, spherical shaped Gulab Jamuns, diamond cut Kaju Katlis and the eternally loveable square shaped barfis. Even the shapes of our sweet dishes offer more varieties than the entire world’s sweets all together. So, let’s explore a few tonight. 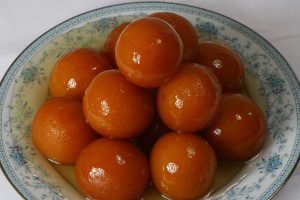 The epitome of sweetness and the harbinger of merry occasions, Gulab Jamuns is one of the most royal sweet dishes Indians offer. This is one dish which most often decorates the dessert counter sof Indian Marriages. Eaten warm, soft and dipped in slurpy sugar syrup, this sweet dish is enjoyed by kids and adults alike. To the uninitiated, Gulab jamuns are milk solids based spherical dumplings traditionally made with thickened or reduced milk and savored in rose flavored sugar syrup. Gulab Jamun is brownish red in color and it inherits the color because of the sugar content in the milk powder or khoya. When the dumplings are fried the sugar caramelization gives it its dark color. Traditionalists eat it when hot and in singular proportions while experimentalists usually add a dollop of ice cream atop of the gulab jamun which gives two solely different flavors to the dish and mingles the warmth and the coolness of both the ingredients. 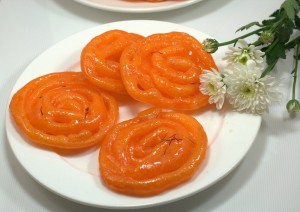 Again, a traditional fried sweet dish which enjoys the honor of being served in most of the marriage ceremonies. Jalebis are orange in color and are enjoyed best while warm. Jalebis have a chewy texture with a crystallized sugary exterior coating. This dish derives its roots from Iran where it is known as Zulbia and was traditionally given to the poor during Ramadan. It is made by deep frying white four in spiral shapes which are then soaked in sugar syrup. These are one of the highest selling sweet dishes in the local markets during chilly winters. 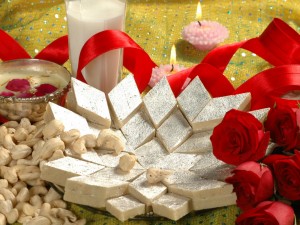 Well, kaju literally means cashew nut and this sweet dish is based on these nuts. The batter or barfi is made by thickening milk with sugar and dry fruits. It is then spread in a flat, shallow dish and cut into desired sizes and shapes. Kaju Katli is often seen as diamond shaped quadrilaterals and comes in expensive at Rs. 500 a Kg. This sweet dish is generally given to friends and family members during Diwali celebrations as a mark of celebration. This dish has what the English call, gravitas. The thickened milk attributes to the dish by giving it a melting base. Melting, because as the barfi slides along the contour of your tongue, it starts melting and bursting into flavors. But the barfi’s card of aces is the cashew ingredient which makes it different from all the other barfis in town. 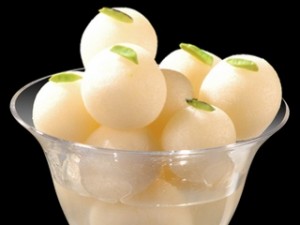 Many kids and uninitiated people muddle Gulab Jamun and Rasgulla with one another. This because Rasgullais the light shaded, spongier cousin of the gulab jamun. Rasgulla is similar in shape to Gulab Jamun and is cooked in sugar syrup, just like the latter. West Bengal on the other hand gave the world a newer sweet dish (similar to rasgulla) called Roshogulla which is lighter than the original and is dipped in lighter sugar syrup. Rasgulla is made up of ball shaped dumplings of Chenna( Indian cottage cheese) and semolina dough. Rasgulla is eaten cold and is refreshing and has an unbridling effect on its consumers. That is, its consumers will never be satisfied with just one. The Rasgulla originated in the present day Odisha as Khirmohana. Traditionally it is offered as a special offering to Goddess Lakshmi a day after the famous Rath Yatra at Jagannath Temple at Puri. The most popular variety of the Rasgulla is the lighter, spongy white variety. Roshogulla is a less perishable item and can often be found in canned tetra boxes. This availability of the canned variety led to this sweet dish’s popularity outside of Kolkata where it was born. A quirky fact about Roshogullas fame is that the Indian Space Research Organization (ISRO) is developing dehydrated roshogullas for Indian astronauts in its planned mission in 2016.

Laddoo also brings in delightful memories with itself as there is seldom a person in this country who was not treated laddoos to, while in his/her childhood. Laddoo again are ball-shaped sweets popular in India. These are made of flour, minced dough and loads of sugar with other ingredients that vary by recipe. They are often served at festive or religious occasions. There are a variety of laddoos available in India and all of them use a different flours  like Besan ke Laddoos use chickpea flour as the base and coconut as the garnish. These are combined with sugar and ghee and molded in ball shapes. These delicacies are often decorated with silver foil and almond chips. Laddoo is often given at temples as a Prasad especially at Tirupati Venkateshwar Temple, Andhra Pradesh.  Quirky fact: A Laddoo weighing 6,300 kg was made for the Indian God Ganesh in Andhra Pradesh in September 2012.

Thus these were quite a few of the exemplary unique dessert’s that India as a cultural hub enjoys. While the list is never ending these are the ones which are the most famous or the most loved.