While vacationing in Singapore some time back, I had the good fortune of getting to explore the then newly opened Universal Studios along with my grandmother. Located within Resorts World on Sentosa Island, Singapore, the massive theme park as one can see today took nearly two years of construction and testing to build. This one in a kind tourist paradise is stunning and extraordinary in its architectural finesse and roller-coaster layout, and has quickly risen through the ranks to become one of the best theme parks in Asia. Spread over an area of around fifty acres, Universal Studios Singapore contains a total number of twenty-four specially designed attractions. There are seven specific zones based on a bestselling television series or blockbuster film produced by the company, all surrounding an artificially modified lagoon. The park was officially inaugurated on 28th May, 2011, and since then, the tourist crowd has been pouring in consistently for the unforgettable rides offered there. 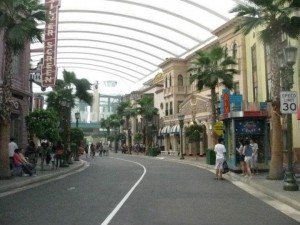 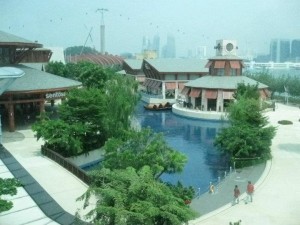 Themed after the Hollywood Boulevard of the 1970s, Hollywood forms the entrance zone of the theme park. It features a long, but adequately spacious walkthrough with the erstwhile dynamic architecture lining the faux street, complete with the signature palm trees. With an outstanding replica of the celebrated Hollywood Walk of Fame, this zone also contains a Broadway style theatre, which regularly holds live musicals starring characters from Universal Horrors and Sesame Street. Several restaurants and a variety of flagship shops also line the walkway, selling unique dishes and eatables such as chocolate fudge, candy floss, and elaborate main course preparations from many cuisines, as well as movie memorabilia, celebrity posters, books, themed souvenirs, film accessories and apparel. Different food joints in the Hollywood zone have been remodelled to resemble settings from iconic Universal films, such as Mel’s Diner, which is based on the 1973 production, American Graffiti, and serves its customers snacks and beverages as per the culinary traditions of the 1950s. 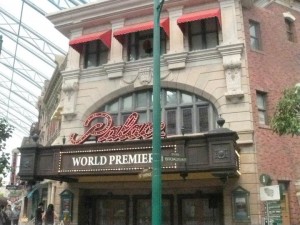 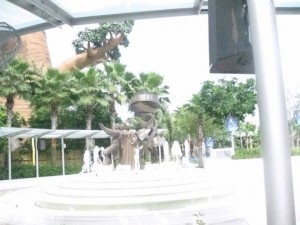 The New York zone lives up to its name, and is a perfect post-modern replication of the Big Apple, with its signature neon lights, huge billboards, towering skyline, and bustling sidewalks crafted to visual and aesthetic perfection. One of the major decor pieces here is the replica of the much renowned New York Public Library which has been created by talented artist in precision down to the last detail, and even has the two enormous statues of lions in white stone guarding its faux entrance. Lights! Camera! Action! Hosted by Steven Spielberg is this zone’s front running sound and lights show fitted with additional special effects to mimic a major hurricane about to hit the city. Other attractions in this area include New York styled pizza parlours and barbeque grills, apart from a Sesame Street: Space Chase themed indoor ride featuring beloved characters such as Elmo, Cookie Monster, Bert, Abby, and many others. 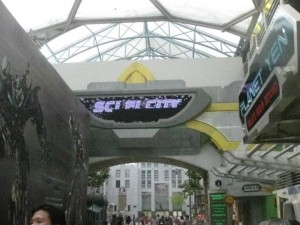 Sci-Fi City proved to be one of the most exciting zones for me in Universal Studios Singapore by far, and will indeed prove to be delight for countless other science fiction enthusiasts. It is supposed to be an imagining of the future of human civilization, with remnants of the human population and previously unknown alien beings socializing and living together in a much more technologically advanced era. The blue and red Human and Cylon roller coasters inspired from the Battlestar Galactica television franchise currently hold the world record of the tallest pair of duelling roller-coasters standing at a height of around a hundred and forty metres. A Transformers themed simulation ride, which was opened much later by the director of the famous film adaptations, Michael Bay on 2nd December 2011, is another key feature of this zone. A much minor ride of revolving teacups, named Accelerator, and various merchandise shops and themed food outlets are other things to look forward here. 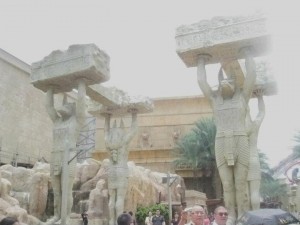 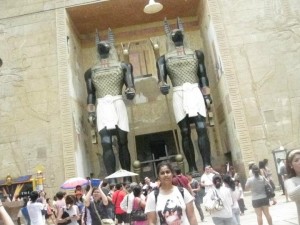 The aptly named Ancient Egypt zone is designed as per the settings of the many American productions of the 1930s, rightfully called Hollywood’s Golden Age of Egyptian exploration. Sandstone obelisks, statues and miniature pyramids form the architectural diaspora of this zone, and the main ride here is the high-speed and dark Revenge of the Mummy: The Ride, which is based on The Mummy film series. Treasure Hunters is another key ride, and consists of an airborne leisure car ride around an abandoned Egyptian excavation site. Apart from souvenir shopping, visitors can eat out at the Oasis Spice Cafe which boasts of a sumptuous multi-cuisine buffet serving spicy delicacies from Lebanese, Turkish, Indian, and Mediterranean cultures. 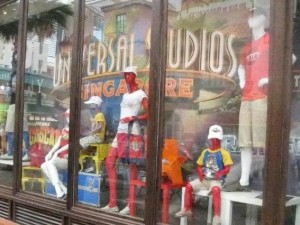 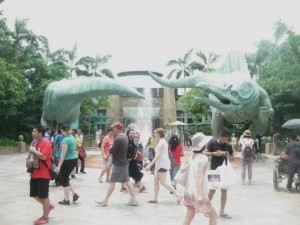 Based on one of the bestselling science fiction franchises of all time, The Lost World zone is divided into two areas, Jurassic Park and the more aquatic based Waterworld. The Jurassic Park series has been based on the popular live-action adaptations of Michael Crichton’s fictional works of cloned dinosaurs, which have been directed by Steven Spielberg. Waterworld is based on the 1997 Hollywood film of the same name which stars Kevin Costner. The Lost World is filled with action packed adventures for all people, and has a diverse range of shows and rides, including roller-coasters, pyrotechnics, water rides, stunts, rock-climbing, as well as movie merchandise retail outlets and themed restaurants. 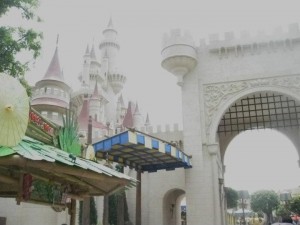 Far Far Away is the fantastical, magical realm of fairytale characters in the Shrek movie series, and one of the more children-targeted attractions of Universal Studios Singapore. From the gentle ogre Shrek to the loud princess Fiona and the lovable Donkey, you will find all the characters from this much loved fictional universe, and be mesmerized by a huge and intricate real-life version of the Far Far Away Castle, and the delightfully dirty replica of Shrek’s Swamp as shown in the animated films. This zone includes miniature child-friendly coasters and ferris wheels, apart from a 4D simulated adventure ride and a digitally interactive live show with one of the characters. An added bonus to this area are the aptly named food outlets which sell memorabilia and food items based on fairytale myths, such as magical potions, liquid elixirs, you name it. 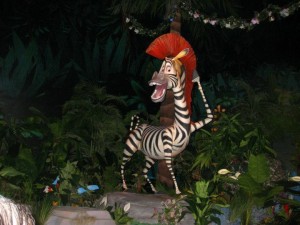 Madagascar is the culminating zone of the theme park, and is based on the animated film adventures of Alex, Gloria, Marty, and Melman, a lion, a hippopotamus, a zebra, and a giraffe, all of who escape from the New York City Zoo, and travel to the wild but unknown regions of the African continent. This area has more kid-friendly rides, such as a crate water ride, and a carousel, and appropriately themed merchandise shops and food outlets.