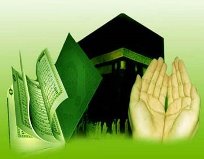 Sweet and savoury delights, evening get togethers, group prayers, sighting sunrise at the dawn and sunset at dusk and thirty days of being peculiarly polite and gentle in all the dealings, Ramadan, the holy month of Islam is celebrated annually across the world. It is the ninth month according to Islamic Calender, which marks as the most sacred period of the year. In this month all the muslims over the world fast, from dawn till dusk. The significance of fasting is ‘purifucation of one’s soul’ and thus, a manner through which the devotees connect better with Allah.

Every person who has faith in Islam and has hit puberty, is morally and spiritually constraint to fast in Ramadan. Each day 1/30th part of ‘Quraan Sharif’ is read/recited, hence, till the end of month the whole of Holy book is completed and people put efforts in implementing all the teachings of Quran in their respective lives. Since in these days, people engage in prayers and kindness more and thus, help themselves to get free from moral defilement, so as to get better treat ‘after life’. Though, the pregnant ladies, menstrual hit women, extremely ill, who are always monitored for medical issues, travelers and sole feeders of infants are exempted from fasting. But they are better asked to make up for the left times afterwards.

Everyday of Ramadan is the day of hard fasting, i.e., no drinking and eating. Therefore, the devotees wake up early before the sunrises and have heavy and abundant breakfast, to keep them going for the whole day. The breakfast is called ‘Sehri’ or ‘Suhoor’. After this, Muslims begin their fasting with first morning prayer, called ‘fajr’. Here lies another important teaching of Ramadan, that is, self-control, self-discipline and sacrificial traits. The all day fasting keep Muslims aware of the hardships and other difficulties faced by the poor and unprivileged ones. Hence empathizing with them and thus performing good deeds.

When sun sets in the evening, Muslims break their fast usually by eating dates or simply drinking water. After the long day of fasting, a good and great amount of meal is prepared. This is called ‘Iftar’. They offer another prayer, and then after it the main meal is served. Iftar is chiefly organised in gatherings at mosques. But nowadays, iftar parties are also conducted by hosts for their respective guests, at banquets or at homes. A large buffet styled meal is served to the invitees. A wide range of delicacies is plated on. Traditional, as well as bit modern blended dishes. A few most sighted dishes in India are shammi kebabs, meat samose, bread pakoras, fruit chaat, chicken rolls, spring rolls, rosuba (pancake filled with cheese), etc. 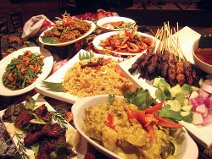 In beverages too, a lot of varieties are served. Rooh Afza, being the most prefered choice amongst all. Other than it there is lemonade sharbat, which is evenly liked. Apart from them, flavored milk, fruit juices and tea are also a great deal to sight.

Most portion of iftar is sweet and dessert like. A few to name, sheer, shahi piece, fruit custard, jalebi-rabdi, milk falooda, buttered noodles pastries with cheese, etc are a common delight to see.

Offering of iftar to poors and needy ones is a divine deed. Feeding them with love and affection, who share similar faith in divinity, is considered to be a fortunate chance to compensate for your wrong doings.

Though iftar is enough for one to end his meal need of the day. But many a times people also dine at night, again, after iftar to abide the ‘three times meal a day’ cogitation. Once the sun has been set and the fourth prayer of the day has been offered, Muslims are free to eat whenever they feel like until next day’s suhoor.

There is a large variety and diversity in food which is ingested, across the world. Due to the regional differences, muslims spread over various countries, enjoy eating largely assorted meals during Ramadan. A few famed ones are, Qatayef, Haleem, Kolak, Laghman soup, Balochis, Es boua, etc.

Also, during this period, muslims avoid engaging in bad habits such as using abusive language or having malicious intent for others. Even they refrain from having any kind of physical intercourse. Listening to music and watching tv is also considered to be offensive, as nowadays tv commercials and tv programs come with unethical and immoral scenes, which are not to be observed, in this sacred month of Islam.

After completion of 30 days (or 29, as the case may be), Eid-ul-fitr is celebrated, which is marked as the most awited and happiest festival among muslim community. A three day long celebrated festival, brings happiness and rebuilds faith in Allah, among the devotees. And yet another reason to enjoy world class delicacies and savor the joy of togetherness.