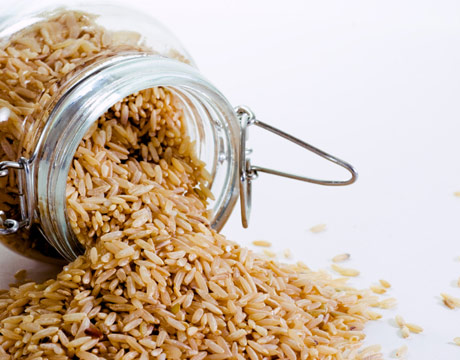 Well, Brown rice is something probably everyone has heard of and is now too common to see in grocery stores. And, they are better than White rice; most of us know that! Though it is true that White rice looks more attractive and delicious than brown rice because of its texture and majority of people choose white one but that doesn’t mean it makes them a healthy alternative. According to many studies, it has been proved that Brown rice is the top choice in terms of nutrition and inherent health benefits.

Now, the question comes, Why Brown Rice?? The answer and the reason lies in the Process, which occurs like, before white rice went through refining process, it looked exactly like brown rice. Brown rice , actually are still left with the hull and bran which renders it quick cooking time thus making it easier to digest as it’s much lighter in the stomach and are also regarded as unpolished rice. These side hulls and brans provide them with natural “wholeness” to the grain and are rich in proteins, magnesium, calcium, fiber. The health benefits associated with replacing White rice in your diet with Brown rice are like it reduces the risk of Type 2 diabetes and also help in losing weight. The well known fact is that eating whole grains is critical part of any diet. Also, there was study by Harvard Medical School, which solely  confirmed that gaining weight  was inversely associated with the intake of high-fiber, whole grain foods. This literally meant that taking more whole grain foods will lead to less weight gain. That’s the reason why these all bran corn flakes or whole grain breads are recommended for people trying to lose weight. It proved that women who consumed more whole grains consistently weigh less and were very less likely to gain more  weight compared to those eating foods made from refined grains. The enlisted benefits of brown rice being counted are; 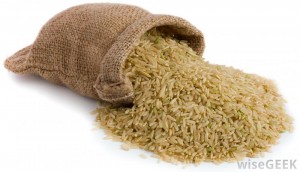 High source of Anti-oxidants: The best thing, if any about brown rice is that they are rich in antioxidants. Usually, the general perception is that the antioxidant intake is associated with blueberries, green tea or other fruits and vegetables. The antioxidant capacity of brown rice is right up there with these superstars, giving you all the lovely benefits like these wonder foods. So, learn to enjoy its taste.

High Fiber Content: Brown rice contains high fiber content , supplying 14 percent of the recommended daily value for fiber, which is an important nutrient to prevent cancer and is considered as number one food to prevent colon cancer. All this is attributed to the high levels of fiber as it attaches to substances that cause cancer and toxins, thus eliminating them and preventing in developing in those areas. Also, fiber is known to promote cardiovascular health.

Perfect Baby Food: Brown rice in itself is a cereal and this is what makes it a perfect food for babies due to natural nutrition and fiber it is known to contain. Moreover, it is excellent food for preventing the risk of asthma in childhood as studies show that whole grains like brown rice or fish lowers this risk by 50 percent. This is better choice than polished and refined white rice as growing babies require nutrient rich diet to maintain their rapid growth cycles.

Rich in Selenium and Manganese: Brown rice has very rich content of selenium , which is known to destroy cancer cells and even repair DNA. What is worth knowing is that just one cup of brown rice contains 88 percent of the recommended daily value of Manganese, which reduces the risk of common illnesses, such as arthritis, cancer, heart disease and fights the risk of developing free radicals. Manganese is very beneficial for our nervous and reproductive benefits and plays a key role in synthesis of fatty acids.

A Slow release in Sugar: Do you know that Brown rice helps in stabilizing sugar levels, and this is what makes them an excellent choice for diabetic patients. Studies show that people who consume atleast half cup of brown rice daily have more stabilized sugar levels than the ones who eat white rice. Just eating whole grains like barley, whole wheat or brown rice will lower the risk of developing type 2 diabetes.

Good Source of Phytonutrients: These compounds which have anti inflammatory properties are naturally found in plants and they tend to act as antioxidants. Many researches have shown that brown rice are known to provide as much phytonutrients as other foods like fruits and veggies.

If you havn’t consumed brown rice yet, it is required to develop taste for them. Though they tasteless, but still. So, first you should mix 1 cup of brown and white rice each, when making for the first time. Then, gradually reduce the portion of white rice while cooking and eventually you’ll end up making and eating brown rice solely in your diet. And, you will soon start liking rich nut like flavour and brown texture of your rice. Then, continue with this brown rice diet and enjoy the wholesome benefits. As, rice is such a popular menu option in all the cuisines and in almost all the cultures around the world. So, when there is such a healthy option for us, why should we ignore it. Generally, people don’t know much about brown rice and unconsciously go for white rice in grocery stores as they loved the aroma and are so used to it. But, with so much talking about brown rice, now people have started taking brown rice as they are loaded with nutrients and their awesome wholesomeness. Non-Basmati makes a good dinner and fends off hunger cravings; And with so many health benefits, its not easy to avoid them now. Also, taste for them develops with time and altogether your health also will improve. Also, try these healthy delicacies as above and enjoy the deliciousness.